The rest of the world may begin and end years in January, but moms of school-age children know September to be the true New Year. With each closing summer and impending fall comes a mixture of celebration, anticipation, mourning, anxiety, and reflection. 8 summers have changed so much in our lives. 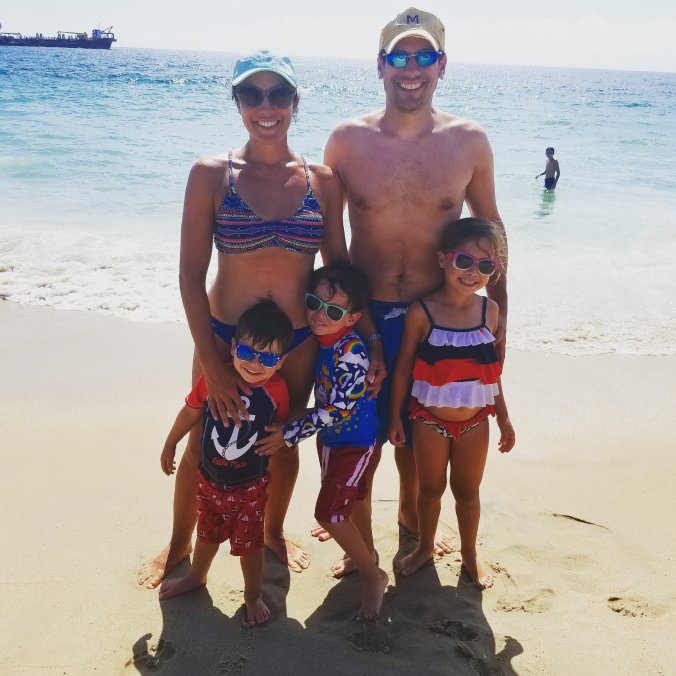 As beach bags shift to backpacks and flip flops are replaced with school shoes, long sun-drenched days of summer come to a close. A chapter filled with memories, experiences, and togetherness is filed away in the mind to be recalled upon in following years for comparison and nostalgia. 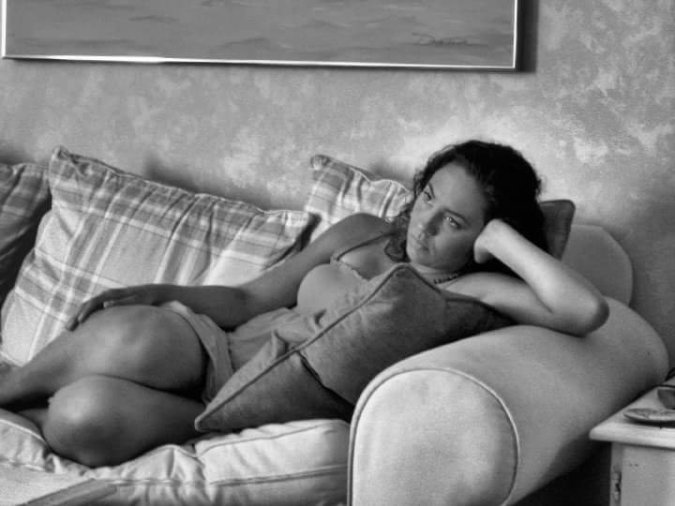 8 summers ago was unrecognizably different. The Hubs and I were a year deep into trying to conceive our first child. My hair was thinning and my abdomen was painfully swollen not from pregnancy, but from Clomid-induced ovarian cysts. I was hurting in all ways. Beach trips were quiet if not dull. We’d pack two beach chairs, two towels, and a small cooler for a stint on the sand. We visited the local medical center for a vacation sonogram to ensure my cysts were not dangerously large. Now — 8 years and 3 kids later — we have a bike buggy, two bikes, and an overflowing beach cart to haul a day’s worth of gear. 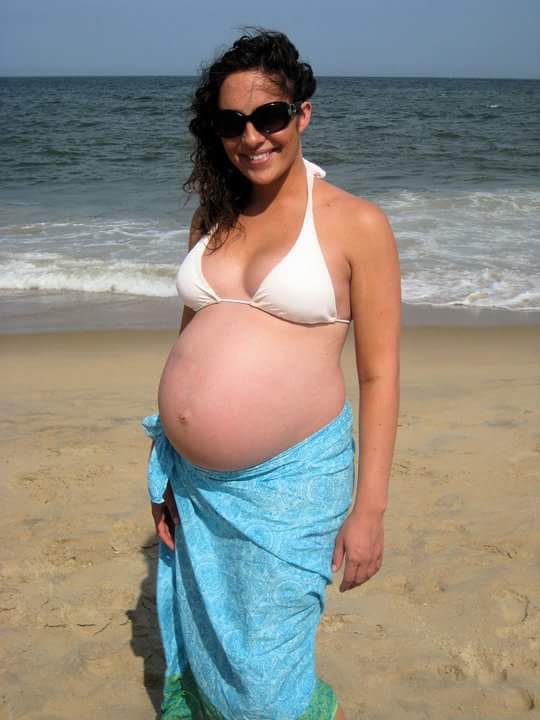 7 years ago our summer was split in two: massively pregnant then new parents. I went from cooling my swollen ankles in the surf to dusting sand off of my 5-week-old’s duckling fluff head. It was a time of anxiety, adjustment, upheaval, gratitude, and fatigue. 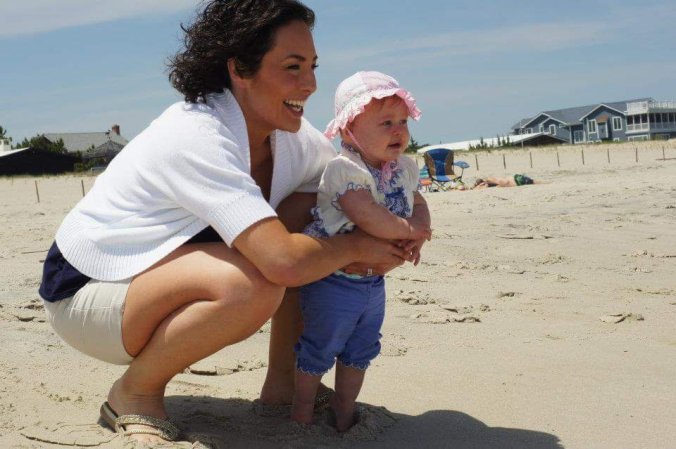 6 years ago we had a crawling 1-year-old on the beach and a brand new pregnancy. We arrived on the seashore exhausted from little sleep and morning-sickness. We chased our sleep-averse tot along the sand feeding her bits of lunch as she explored. We packed just one beach chair that stared at us mockingly; it knew sitting was a luxury we would not regain for another half a decade. It was a tiring but happy year full of newness. 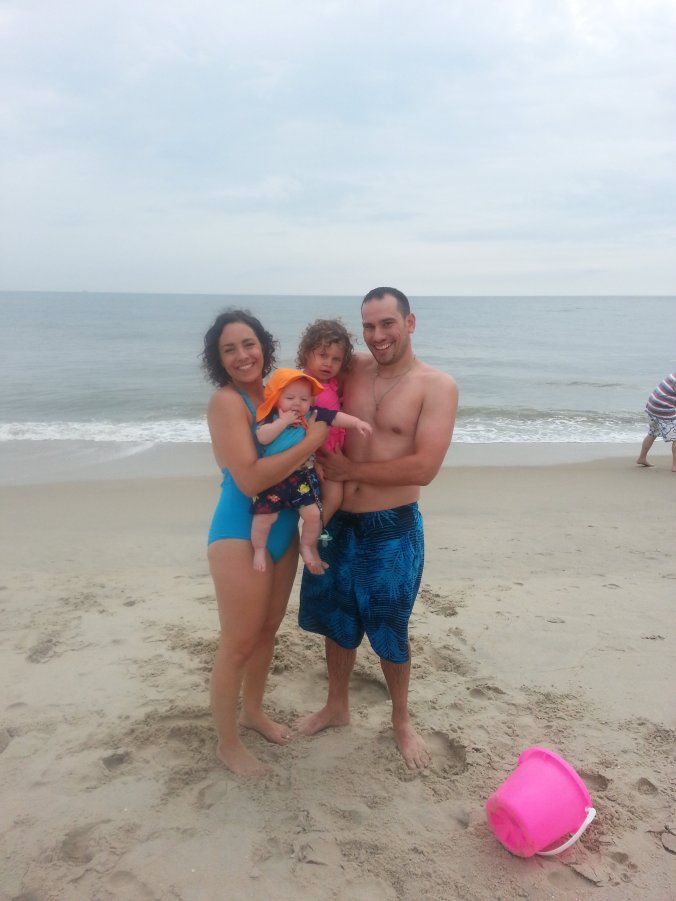 5 years ago we had a newborn and a tantruming toddler. I — still skittish about nursing in public — would tuck myself away in the sandy, sweaty foldable beach tent to breastfeed every 20 minutes, looking longingly at sunbathers and swimmers floating through their beach days. I unnecessarily tortured myself for fear of offending others. It was a time of unending exhaustion, guilt, enjoyment, and envy. 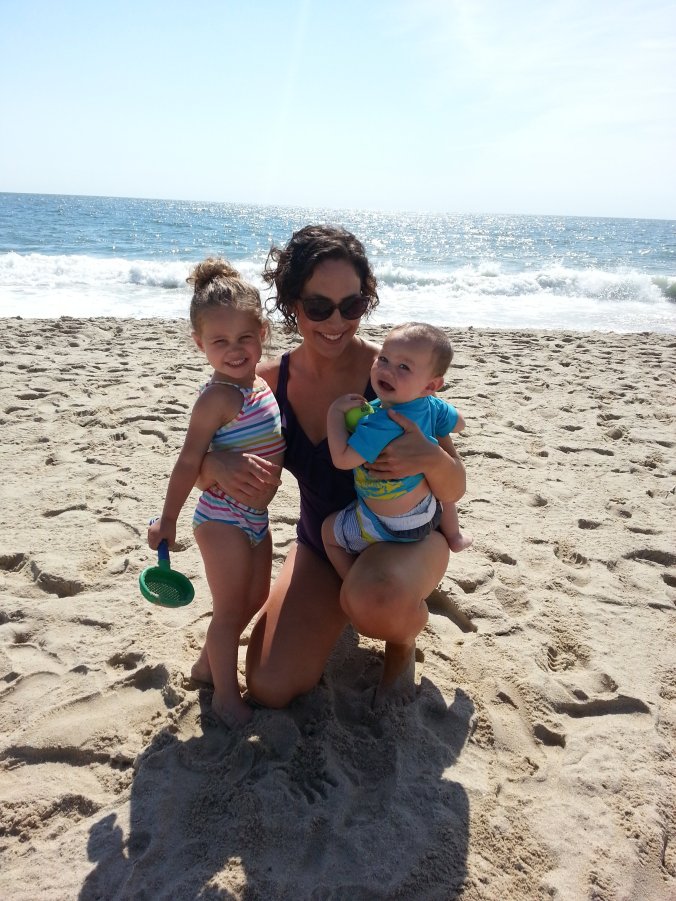 4 years ago was our toughest beach year. We had a highly verbal, temperamental 3-year-old and a newly mobile 1-year-old who was hell bent on self-endangerment. It was constant wrangling, from tantrums to keeping a toddler from wandering into neighboring beachside camp sites, toddling into the waves, bopping his way over the dunes and into the parking lot, eating or throwing sand, stabbing himself or others with sticks or shards of seashells, or climbing rickety sand-planted umbrellas was a never-ending task. Beach days were exhausting. Naptimes and pumping times had to be kept. Vacation breastmilk recipients had to be found. All time had to be filled lest the un-childproofed beach house be destroyed. No one sat. Ever. It was a trying time filled with adorable snapshots and long sunny days. 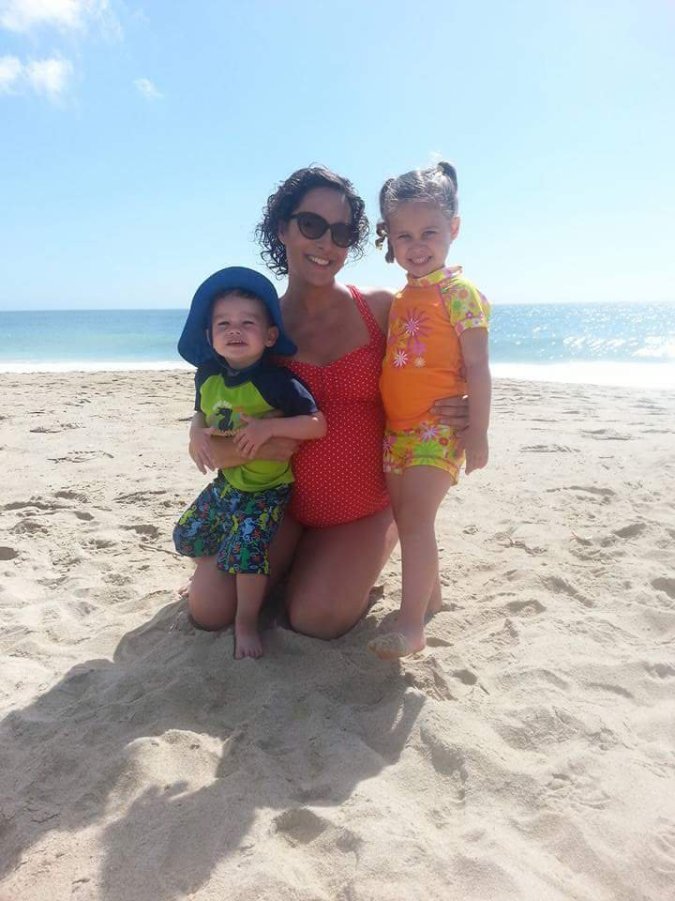 3 years ago I was ginormous with baby #3 while keeping tabs on a social yet still emotionally unhinged 4-year-old and an adventurous 2-year-old. They enjoyed scouting out campsites containing the most enviable beach toys — ignoring their own laundry sack of plastic playthings — and striking up faux friendships before trying to abscond with the coveted items. It was not a proud year and, still, no one sat. It was a time of many apologies and reprimands, precious photos and cute memories, tired legs and sandy hugs. 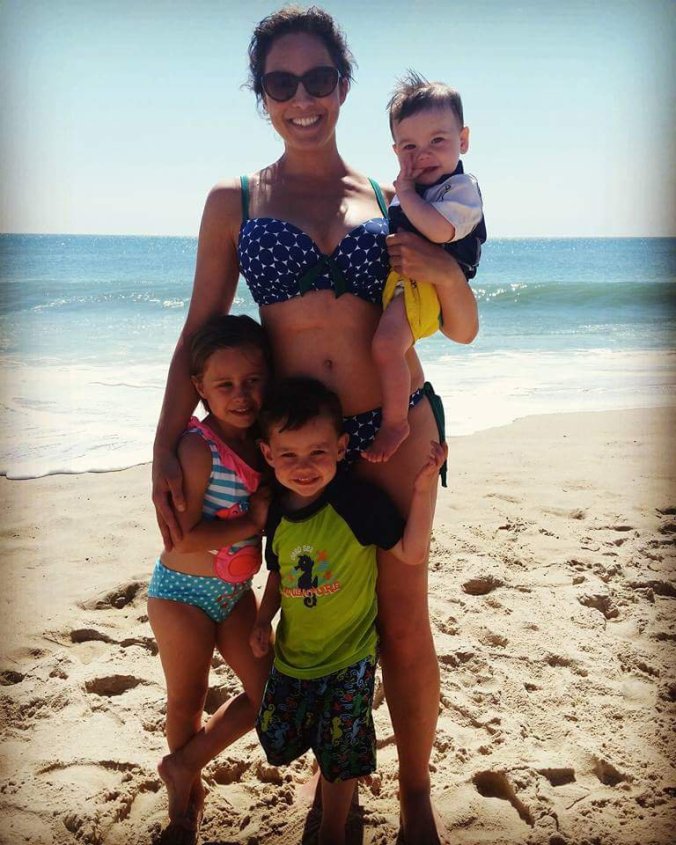 2 years ago we had a 5-year-old rising kindergartener, a princess-adoring 3-year-old, and a babycarrier dwelling 1-year-old. I had tanlines from my Ergo carrier. Every day we’d walk like packmules onto the sand. Every day we’d set up camp and the two eldest would fervently request their first of many snacks. Every day our 1-year-old would promptly lose his mind and cling to my leg, demanding yet lamenting the morning nap from which he was beginning to self-wean. Every day I’d strap his sandy, sweaty, stout body back into the baby carrier and walk and nurse and walk and think. It was simultaneously soothing and tiring. When the nursing stroll ended, I’d return to the campsite — ankles and feet sore from striding along the slanted water’s edge — to nurse the baby or settle squabbles or fetch snacks to appease the unquenchable appetites of my growing 5- and 3-year-olds. We had to navigate sleep schedules and pumping sessions. I had to find local milk recipients for my vacation-pumped breastmilk. There was no sleeping. There was no sitting. The vacation was a marathon. It was a cuddly, demanding, active, milky, memorable time. 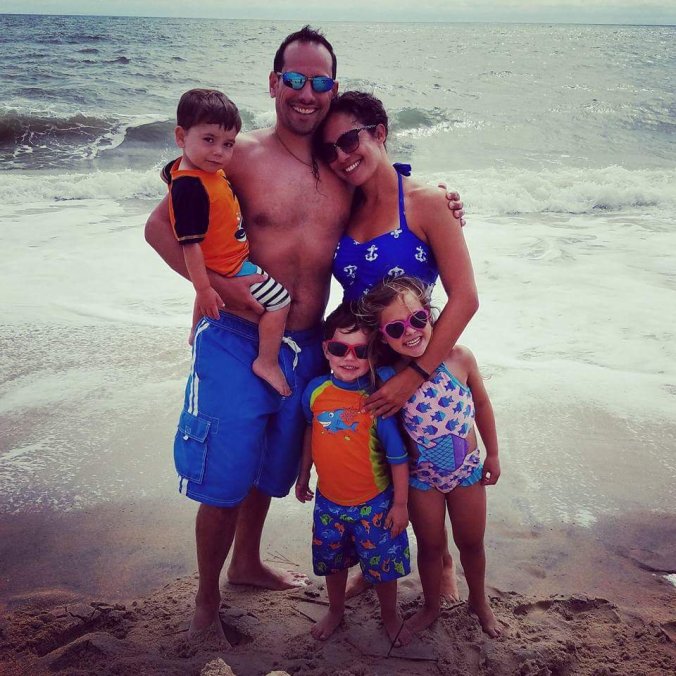 1 year ago things got easier. Our 6-, 4-, and 2-year-olds were sleeping more, testing limits less, and becoming increasingly independent. I weaned from pumping breastmilk for donation. We invested in a beach cart to lug our tower of beach gear. Siblings played with one another, content with their collection of toys instead of pilfering others’, and enjoyed playing in the waves. Occasionally we sat. It was an enjoyable time of memories and sand-dusted days. 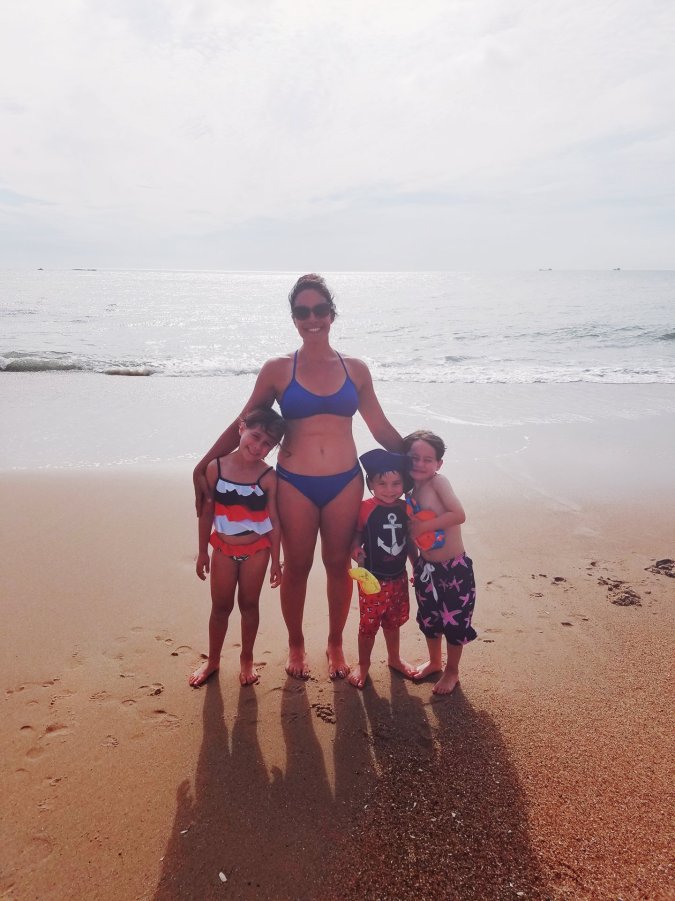 This year — with a 7-, 5-, and 3-year-old — we hit our stride. The kids played. The tantrums were fewer. There were no naptimes or pumping sessions to navigate. Snack requests were still numerous, but The Hubs and I were able to sit on occasion… at the same time! Child duty was often divided one parent with the older two and one parent with the youngest one, unless my parents were also seaside, which meant one adult might be entirely untethered. There were actual moments of true relaxation! It was a time of laughter and memories, enjoyment, and fun. 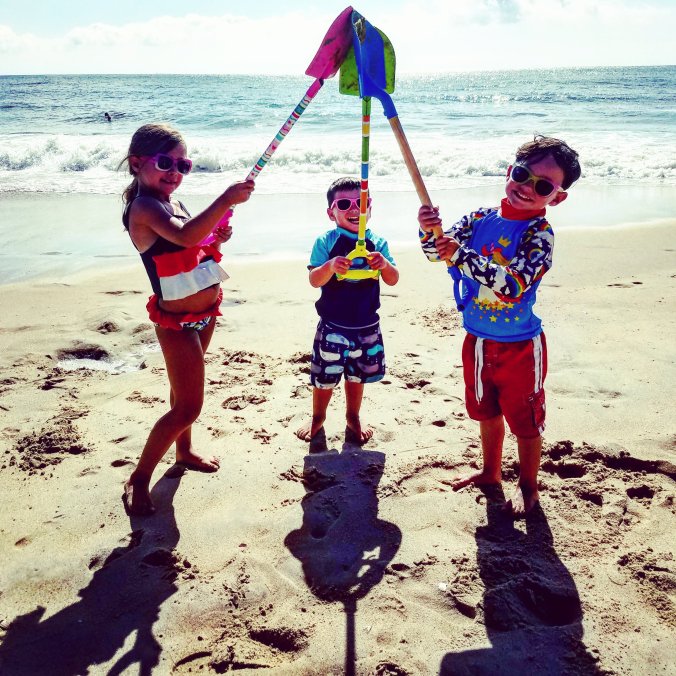 It took us 8 years to get here. So much changes in four seasons. As warm sand turns to crisp fallen leaves to silvery snow to blooming flowers and back again, where will this next year lead us? How will we arrive on these same sandy dunes next summer? A little older, a little wiser, a little wilder, a little grayer, and a little more nostalgic of a time not so long ago.